Established in 1990 Jet Wheel Tyre have grown to 3 branches across the local area in Benfleet, Rayleigh & Pitsea. With hundred's of great customer reviews we have become known as the go to tyre center for all of your car services. Our wide range of services now includes Car Tyres, Car Servicing, Car Brakes, Car Batteries, Air Conditioning, Tyre Puncture Repairs, Wheel Alignment, ADAS and much more. 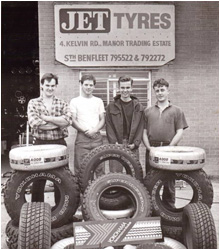 We opened a new wheel warehouse ‘Jet Wheel’ in the unit opposite.

This was the year that we also opened our Pitsea depot, located to the rear of Technique car sales on Pitsea High Road ... and our Rayleigh depot at the back of the Imperial Park Trading Estate, Rawreth Lane, Rayleigh. 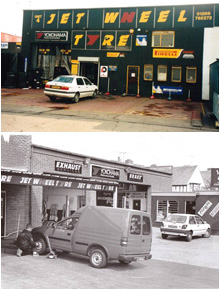 This was a busy year for us! Our Benfleet depot was refurbished to become a performance workshop, with the capability to modify high performance cars, with high performance, Run Flat and 17” and 18” car tyres, new wheels and lowering springs.

We rebuilt and refurbished our Pitsea depot.

Our partnership with Pirelli Tyres began.

We began our partnership with Michelin Tyres.

This was also the year that the Jet Wheel Tyre car was created! 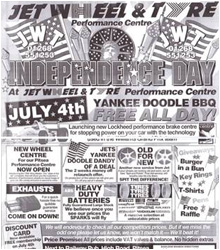 This summer we celebrated Independence Day and our partnership with BFGoodrich Tyres and American White Wall Tyres, we provided lots of fun with a BBQ, prizes and a raffle! 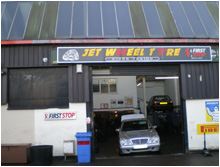 We moved our Rayleigh depot to a better position at the front of Imperial Park Trading Estate. 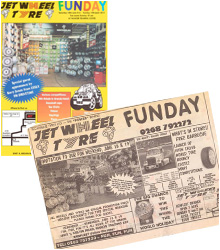 We celebrate 10 years of JWT with a Funday in the summer – a BBQ (Our favourite!), a bouncy castle and lots of giveaways made this a great family day out!

We were awarded the Pirelli Driver Centre status at all three of our depots, Benfleet, Pitsea and Rayleigh.

This year, we hosted a Ladies Car Clinic at our Benfleet depot – Do you know your dipstick from your lipstick? – This turned out to be a very popular event, teaching useful skills from general car maintenance to what to do if you break down. 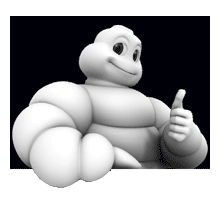 We achieved the status of Michelin 5 Star Accredited Centre at our Benfleet depot, not quite as famous as a chef’s Michelin star, but we’re very proud!

This was the year we said goodbye to our very first units on the Manor Trading Estate, Benfleet, moving to a bigger, better, purpose built premises on Church Road.

Our concentration also moved away from wheels, to the range of products we still offer today: tyres, exhausts, alignment, brakes and batteries. We became one of the largest performance tyre stockists in the area.

This year it was our Rayleigh depot’s turn for a bit of redecoration; we expanded into two units, equipping this depot to provide a wider range of services to a very high standard. 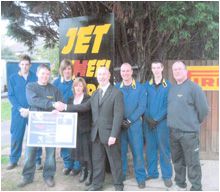 This was also the first year JWT teamed up with Little Havens Children’s Hospice to provide fundraising support at their Ferrari Day. We have continued to help at similar Little Havens events every year since, with each event raising vital funds for the charity.

In 2010, our Rayleigh depot was awarded their first Pirelli Performance Centre status at Gold level.

In 2012, our Benfleet depot became the first performance centre in the country to win Pirelli Performance Centre of the year for the second time!

This year we have created our new JWT logo in addition to our original logo, ready for the next chapter in the JWT story. Our Benfleet depot is maintaining its Pirelli Performance Centre Platinum status, and is also approved by the Buy With Confidence scheme. Our Pitsea depot is a member of the Pirelli Key Point scheme, which replaced the Pirelli Driver scheme. Our Rayleigh Depot is maintaining its Pirelli Performance Centre Gold status.

All three of our depots are members of the Michelin MAP scheme, which replaced the Michelin 5 Star award. JWT is also a member of the Point S buying group, for which all our depots must pass a strict inspection to ensure we are meeting all safety and quality guidelines. 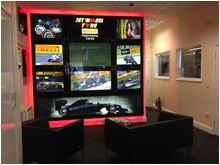 Celebrating our 25th year of trading!

We have renovated our waiting room with its very own Pirelli Cool Wall - representing racing, calender girls, formula one and MotoGP. It is the only one in the country at the moment!

Saturday 5 April we won Castle Point Business of the Year. A total of 160 guests looked on during the Castle Point Mayor's Civic Dinner as the we became the seventh winner of the annual award, which is presented to a company that has demonstrated business excellence over the previous 12 months.

In our winning application, we were able to showcase our membership of Trading Standards' Buy with Confidence Scheme, and achievement of Pirelli Performance Centre Platinum status (one in only 6 to gain the Platinum status), passing a strict audit from industry specialists who assess businesses on quality of staff, premises and customer satisfaction.

Works on the renovation of our Pitsea branch are progessing, we have repaved the forecourt, re-cladded the building and are looking to spruce up the waiting room and have new signs put up on the front of the building. This is coming along nicely beside the regeneration of the Pitsea Centre, which is now advancing in the New Market Square, new Aldi and re-paving of the Northlands pavement.

New signage for our Benfleet branch was put up mid-2016.

We held a Porsche open day at our Benfleet Branch.

In 1999 we took on a new workshop and over the following months we have been developing this unit.

Jet Wheel Tyre are proud to be a Point S Partner. A national retail network with an identity that is synonymous with 'Quality Service' Independent Tyre Dealers working together to soon be acknowledged as the Number 1 service provider in the country.